In 1905 the Williston Public Library was established as the result of a vote at Town Meeting. The library was opened in a portion of the Modern Woodmen of America’s Hall, what is currently the Town Hall Annex, in October of 1905. The original collection consisted of 225 books, most of them on loan from the State Library, for a population of about 1100.

19 year old Sylvia Warren was hired as the town’s first librarian. What she lacked in age, she more than made up for in enthusiasm. She would serve as librarian for the next fifty years. During that time she would donate her entire salary of $50 a year back to the library by buying books for its collection. By 1912 the library was open two days per week and had three branches, at North Williston, Lamson School and Muddy Brook School. 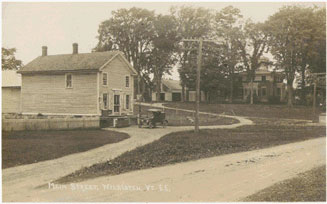 In the late 1920s the library was moved to the second floor of Warren’s General Store, owned by Sylvia’s father, C. D. Warren. Sylvia was also made the town’s postmistress a few years earlier and both of jobs were now located within her father’s business. The store no longer stands, but it had been on the east corner of Williston and Oak Hill Roads across from the Federated Church.

In the 1940s Dorothy Parker Alling, a former teacher, saw a need for the children of Williston to have better library services. During the summers through the 1940s and 50s she invited children into her home for a snack, story time and to borrow books. Alling called her library the “Little Folks Library” and established the collection through a combination of means. The bulk of the collection was from the State Library’s book wagon which would deliver books for summer loan. It was supplemented by the “Williston Mothers’ Penny Club.” Mothers would receive a penny from Alling and would then be given 3-4 months to collect as many pennies from that same year’s minting as they could. The pennies would then be collected and used to buy children’s books. In 1952 she also began writing to Vermont celebrities and asking for donations of their favorite children’s books.

Donations were collected from Norman Rockwell, Senator Flanders, Dorothy Canfield Fisher and several Miss Vermonts among others. Each of the donors sent several titles, many of them were autographed. In 1953 Alling also began supporting the adult collection of the library with a memorial collection which she established with her mother and sister after her father’s death.

During the early 1950s Warren’s General Store closed and the post office was removed so the collection was brought down to the main floor of the building. By then building was in poor repair and the books were damaged by dampness. In coldest months the library would not open at all. In 1955 Sylvia Warren retired and the library was run by volunteers who checked books in and out to patrons during scattered hours. For about a year and a half the library suffered from declining service without a librarian at its head. Betty Hart was hired in 1956 as librarian for $3 a week or $156 a year. She would serve until 1969.

After Dorothy Alling died in December 1958 her husband Frank had a new public library building made for the town in her memory.

The brick Colonial Revival building was built on a portion of public land, which would eventually become the Town Green, directly in front of Williston’s Central School. It totaled 1500 sq. ft. on a main floor and basement. The library, now renamed the Dorothy Alling Memorial Library was dedicated in April of 1960.

By the time Betty Hart left her position the library was already facing the first of Williston’s huge increases in population. The population more than doubled between 1960 and 1970. During 1968 the basement, formerly used for storage and book repair, was remodeled by the local Kiwanis group to become a combination of meeting and children’s space. Adelaide Lane, librarian from 1969 to 1975, may have had an improved space to work with but she found that if the weather allowed, it was often best to move programs outside.

Former Trustee Helen Oustinoff watched over the library for about a year while the Trustees searched for a new librarian. In 1975, Rickie Emerson would become librarian and hold the position for the next thirty years.

By 1980 the library was ready to burst at the seams. The population of Williston had increased by 160% since 1960 when the Dorothy Alling Memorial Library was opened. After five years of planning and fundraising a 3,275 sq. ft. Greek Revival addition was attached to the south side of the library. It was hoped that this addition would last for over 20 years but it was about the time that the first addition opened in 1986 that the area called Taft’s Corners was beginning to be developed into what would become a major regional shopping center. Williston’s population was still growing. It would nearly double again between 1980 and 2000. Rickie Emerson put on her hard hat again.

What would Sylvia Warren, the town’s first librarian, think of the library today? By 2005 the town’s population was estimated at 8,243 people, but because of the commercial district, the average weekday population with commuters and shoppers increases to an estimated 19,000.

Now, in addition to the residents of Williston, the library provides service to residents of St. George and residents of other towns in Vermont through the HomeCard System. The library’s collection has grown from 225 books to over 40,500 items in a variety of formats. The library also has several hundred programs each year, a community meeting space, gallery display areas and weekly deliveries of materials are made to senior communities and patrons who find it difficult to come to the library because of physical needs. Dorothy Alling would find the spirit of “Little Folks Library” is alive and well in the library’s bookmobile, Dottie, which makes visits to children in Williston’s neighborhoods during the summer.

In 1905 the library’s patrons could not have known of the vast changes in technology to come. The services of the library are no longer just within its own four walls. The library now provides public access computers in addition to patrons accessing the Internet through the library’s free wireless network with their own laptops. At the library’s website patrons can find schedules and information on library programs, sign up for the monthly e-newsletter, and access online databases and download audiobooks and e-books at any hour from their own homes. The library’s catalog has migrated from handwritten note cards to a computerized system where patrons can view the listing and place holds for materials from their homes.

But, the library helps the town keep a connection with its past. The original library on this site is now the Vermont Room which houses the Williston Historical Society’s collection and archives as well as the library collections about Williston, Vermont and the Civil War.

What other changes will the next few decades bring?